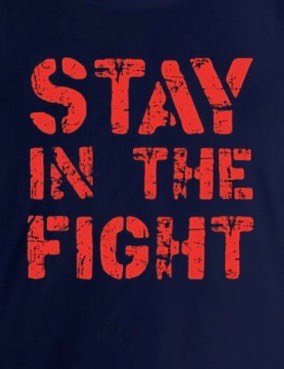 Stay In the Fight

Last May, the Washington Nationals baseball team was in trouble.  Long a perennial playoff contender, they suddenly found themselves facing a losing season for the first time in five years, with an abysmal record of 19 wins and 38 losses.  The media had already labeled them a “hot mess”.  Their manager, Davey Martinez, was on the proverbial hot seat.  Fans had all but given up on the team and were venting their frustration — loudly — across sports talk radio airwaves. Oddsmakers put their chances of making the playoffs at less than 4%. The team was, for all intents and purposes, done.

Then came a rally cry only the players inside the Nationals clubhouse could hear. Martinez pulled his team together and urged them to ignore all the criticism and scrutiny. His message?  Stay in the fight. Block out the negativity. Just win one game.

And with their backs pressed firmly against the wall, they did just that. The players on the team took their manager’s words to heart and won one game. And then another. And another. Slowly, they began stringing wins together. Four months later, the Nats are in the playoffs and edging closer to their first-ever World Series appearance.  Will they get there?  That remains to be seen (although I certainly hope so), but it doesn’t really matter.  What matters is they stayed in the fight.

Bear with me – this is not a blog post about fake positivity. It’s not about gritting your teeth and putting on a “brave face” for your friends. Or pretending to be happy when you feel absolutely horrible. I’m definitely not some rah-rah cheerleader urging you to dig deep, suck it up, or employ any number of other cliches so popular in our success-obsessed and appearance-focused culture. Because the reality is that life is hard. Sometimes, it’s nearly unbearable. We suffer, we struggle, we fail.  We hurt. We make mistakes. We feel guilt, shame, and soul-crushing loneliness. It’s definitely not — as my mother used to say — a picnic.

So why the baseball analogy?  At first blush, it’s easy to dismiss Martinez’s stay in the fight rally cry as just another motivational sports marketing tool.  A catchy phrase with no meaning or value beyond the baseball diamond, irrelevant for us mere mortals just trying to trudge through the reality grind one more day…or hour…or minute.

This is a difficult choice because many, if not most of us, have been taught to hide our deepest feelings at all costs.  We’ve learned to rearrange our faces so we don’t upset others or (gasp) be labelled as negative, sad, fearful or weak. The message we receive is to prioritize how we appear to others over how we actually feel inside. This misplaced emphasis on outward appearances eventually leads to shame, which of course, leads to isolation from others.  And so we soldier on in silence, disconnected from our feelings and one another, desperately trying to hide the unhide-able and stuff down the unstuff-able.  You know the drill.

When my first husband left our family for another woman eight years ago, I was devastated and heartbroken (an understatement, but words still fail me here even all these years later). I had a new little kindergartner and a third-grader at our local Catholic school and as far as I knew, I was definitely the only mom with a cheating husband who found his wife unappealing and in need of an upgrade. I was humiliated, embarrassed, and desperate to make things better.  I didn’t tell most of the other mothers about my situation, of course (because no one wants to be that poor woman), and instead forced myself to stand on the playground politely chatting about the mommy mundane even though on most days, I could barely get out of bed.

My good friends knew I was sad, obviously, but even they didn’t know how many nights I stayed up all night crying, praying, and reading everything I could find about infidelity in an unsuccessful last-ditch attempt to save my marriage. I was a broken shell of myself fighting desperately to appear unbroken…and I’m not going to lie, it took some serious effort to wear that fake mask every day. Like, a LOT of effort.

While other moms worried about playdates and soccer practices, I curled into the fetal position each time my children “went to dad’s house”.  I struggled with lawyer-ease and financial worries and going back to work after ten years at home with my kids. I lost my self-confidence, and acted like an idiot, and did all kinds of dumb things I’m not proud of. I felt betrayed, and I grieved the loss not just of my marriage, but for the life I had “before” it was so indelibly and unceremoniously upended. I grieved for the loss of normalcy (whatever that is).

And then one day, I realized I couldn’t take the hiding anymore. I suddenly craved real connection, and I knew I needed to reach out more than I needed to isolate.  So I took a step. I broke down and shared with a friend one of my secret fears – that I was afraid I wouldn’t be able to bear it if I ever had to stand on the sideline of one of my kid’s lacrosse games with my soon-to-be ex-husband and his girlfriend.  How would I cope? How, exactly, was I supposed to withstand the humiliation? Would I faint?  Would I be pitied?  Would people feel sorry for me, or worse, for my kids?  I didn’t know, but what I did know I was absolutely terrified.

I didn’t know it, but in that very moment I had taken my first step. I owned my feelings and I voiced them out loud.  I said the unspeakable.  I made myself vulnerable.  I stayed in the fight.

I didn’t stay in the fight by pretending. I stayed in by unburdening. I opened up the pandora’s box of pain and allowed myself to share it with the people I trusted. It may not sound like much, but it was a turning point for me and it completely changed the way I managed my separation and eventual divorce. I dropped the pretense and started getting real with myself and my emotions. I stopped worrying about being judged and let the people who cared about me step in and help me through a very difficult and painful life experience. I turned to my faith, my trusted friends and family, and my own inner strength to help me heal. I reached out and asked for help, and then I learned how to accept it with grace and humility and peace. It wasn’t always easy, and it was definitely ugly and messy at times, but it was a game-changer for me.  By surrendering to my fears, I stayed in the fight.

How will you stay in the fight?

Cancer diagnosis?  Stay in the fight.

Divorce?  Stay in the fight.

Job loss?  Stay in the fight.

Troubled teen?  Stay in the fight.

Caregiver?  Stay in the fight.

Disability? Stay in the fight.

Stay in the fight by asking for help.

Stay in the fight by connecting with others.

Stay in the fight by saying “no” to pretense.

Stay in the fight by taking a deep breath.

Stay in the fight with honesty, and vulnerability, and hope.

It takes real courage to make ourselves vulnerable, to learn to ask for help, and to surrender. It may also just be the most liberating decision you will ever make.  So take one deep breath…and stay in the fight.